They’re everywhere! To be Belgian is to own a bicycle. Even if it’s not used too often, a bicycle is a must have to place in the basement, garage or the mud room.

Bicycles are used by many, many Belgians for a variety of reasons such as to get to work, to get to your public transport to get to work, to do work, for leisure, sport, to fetch the groceries, to take the kids, well you get the picture. Of course there are all kinds of bicycle styles, shapes and sizes as well as accessories to aid with all of these functions. One aid or accessory I have not yet found is bum cream for those first days in the saddle. No matter how soft and luxurious your little seat, you’re going to walk like a cowboy for the first few days if you haven’t regularly ridden a bicycle. I’m not ashamed to say it – my ass hurts!

What I don’t understand is that even though bicycles are so necessary in Belgium, they don’t seem to really make it into popular art. They really aren’t romanticized or immortalized in music. The only Nederland’s song I was able to find about their much loved bicycle is this Ik Wil Fietsen.
I can however think of plenty of songs in English and written by people who I don’t believe would use a bicycle on such regular and everyday ways as a Belgian would. There’s Queen’s Bicycle Race, Pink Floyd’s Bike and Katie Melua‘s Nine Million Bicycles.
Most train stations are also the conversion point for bus stops and tram stops. Antwerp Central Station holds a secret (well to foreigners) under Astrid Plein. That secret is an underground parking garage…for bicycles. 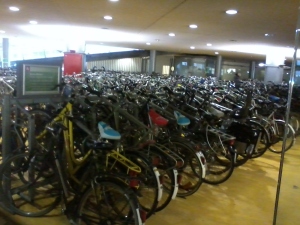 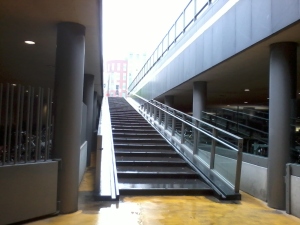 At Berchem station it’s all out in the open. There’s no covered bicycle parking yet. They’re working on that currently and it’s going to be an amazing multilevel bicycle parking facility – Belgian taxes hard at work!

There are all kinds of bicycles for all kinds of uses. There are the functional bicycles, the workhorses and sedans of the bicycle world with the handy accessories to carry goods and little family members.

There are even bicycle trailers to carry your most precious cargos and other more mundane cargo. These trailers convert into prams for while you’re doing your shopping or need to be more pedestrian. 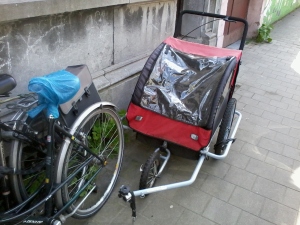 The covered trailer for the executive child or groceries.

Entire families can be carried on one bicycle if required especially useful for those who haven’t found the correct use of a ‘kapot’.

Is it? Could it be? A whole family and groceries on a bike?

There are of course the custom jobs as with any mode of transport. 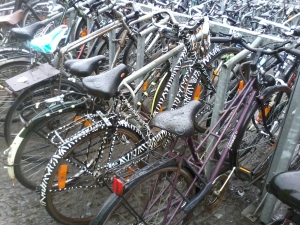 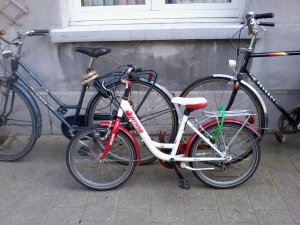 If the bicycle is the equivalent of a car, then those making them go must be the motors. There are the old clapped-out motors, the foreign motors and those really good looking motors too. 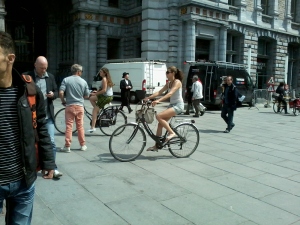 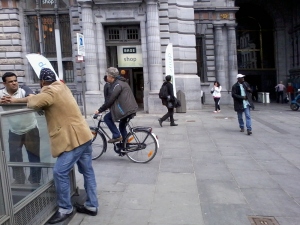 Then there’s the pull up and chaff manoeuvre!

I finally have my own and my little girl loves it! It’s a must-have here in Belgium and if you’re going to spend a length of time here, a necessity I think. It’s far faster than walking and you’re not inhibited by bus, tram or train routes. The terrain here in Antwerpen is really flat too and makes for easy going.