Belgen mensen zijn bourgondiërs – bourgondiër: one of those words that I don’t think has an exact English equivalent. Bourgondiërs means that once you’re seated at a restaurant, pub, café, friend’s house or any other place you’re visiting and having a festive-drinky-eaty time that you’re not likely to get up and leave any time soon – you’re dug in.

The etiquette of drinking or dining (or just catching a bite) out is predicated on this bourgondiërs principle. In fact being at a café is so important that it has a special term! When you go to a café in Belgium you’re not in a café, you’re not at the café, you’re ON café! As in ‘Ik ben op café.’ and when you’re a patron at a café or any place that serves food or drink, you will never be rushed. This also means you’ll never be served if you don’t call for service! 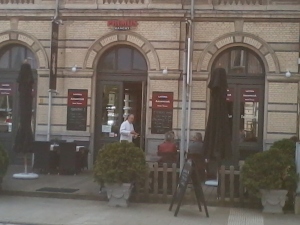 In Belgium it’s all about the visit and not about making sure you get rid of a “happy” customer. Once seated, you’ll be left alone with the menu. If you’re not used to this bourgondiërs principle, you’re going to feel ignored by your waiter instead of embracing the Belgian way and sitting back in your chair, relaxing and enjoying the company (whether it be exclusively your multiple personalities or other) and going’s on around you. When you’ve had your fill of the menu and wish to order something it would be advisable to attract your waiter’s attention with a deliberate hand wave or some such gesture. If you don’t, you’re going to be sitting there dry mouthed for a very, very long time. It’s considered incredibly rude to rush one’s patrons so waiters will only serve you if summoned. They won’t hover about you like overprotective parents with interjections of “So, have you decided on what you’d like to drink yet?” or “Have you decided on what you’d like to eat?” or “May I refill that glass for you?” That doesn’t happen here!

I have yet to be interrupted mid-mastication by a waiter with a cheesy grin asking me “Is everything okay? How’s the food?” Here in Belgium they assume, since you’re all grown up and stuff, that if something’s wrong with the food, you’ll call the waiter over and say something profound like “There is a fly in my soup” or “My steak is not steaky enough.”

Once you’re done eating and drinking, you’re welcome to sit as long as you’d like and absorb the atmosphere, décor or your company’s witty charm. Your waiter will never arrive at your elbow to give you the bill or see if you want anything further because that kind of rudeness is not done here! When you’re good and ready to go, once you’ve had your fill and would like to take your company home to show her anything kapot (Nederland word for broken among other things) you will need to summon your waiter again for the bill because he’ll ignore you until you do. He really isn’t trying to be impolite or deliver bad service – on the contrary! He’s trying to be as polite as possible by not rushing you! You really are expected to visit a little and be a grown-up about the whole outing and decide when YOU want to leave.

No gratuity needs to be added as this service charge is already included in the price however a little gratitude for a job well done never goes amiss if the job was indeed well done!

This bourgondiër concept can also be feared and discouraged. I remember inviting my friend around to Méme ’s house when I was maybe six or seven years old. She lived across the road and I’d always play at her house and today I thought it’d be a good change if she came across the road to Méme ’s place. When she went home at the end of the day, Méme  took me aside and explained in a few short expressions the rules she expected me to abide by.

“Never offer her coffee or food here. Friends will always come back like stray dogs if they think you’re going to feed them and overstay their welcome!”

This is shocking and somewhat nasty behavior at first glance but let’s looks at the history before making any judgment. Because Belgians are such bourgondiërs, visitors will often sit for hours shooting the breeze as it were. Méme , being of a working class simply didn’t have time for this kind of socializing. The best way not to socialize in this manner is to not draw out such visits with food and drink. Donald Trump employs this strategy at certain functions and meetings. If he wants a short meeting he doesn’t serve any drink, food or water and his advice for a really short meeting? Have it around bar tables where the participants have to stand…because you’ve removed the chairs. A guarantee of a short-to-the-point meeting, but I digress…

The second factor is WWII (World War II) which Méme  lived through and experienced in Belgium. Food has always been a precious commodity to her because food was in short supply during her childhood years during and after the war. Sharing food was simply silly and paramount to giving visitors your wallet and saying “There we go, help yourself!” That bourgondiër lifestyle became the property of the rich or entitled during those dark times.

In my country of birth, eating out at a restaurant or coffee shop is quite the thing to do but there the waiter will try to serve you, sell you the most expensive items on the menu and try to get you out of the establishment as quickly as possible to do it all again to the next customer. This way they can turn over as much profit as possible in the shortest amount of time. The service is quick, efficient and you don’t have to do anything barring getting the food in your mouth and chewing! The service of waiters is usually swift and expensive much like a tonsillectomy.

My wife and I have never bought into this. Waiters in my country of birth would hate us by the time the evening was done. For an appetizer and a dessert – no main course (one of our favorite outings) it’d take us three hours to get done! I’ve never taken much notice to waiters buzzing around the table waiting eagerly or continuously asking if we’d like the bill.

Being a bourgondiër must come naturally! I think I have this one nailed – “onder de knie” I believe is the Flanders way to say this.